Saving the Planet one Crab at a Time

Or how the Louisiana crayfish got into the Berlin Tiergarten 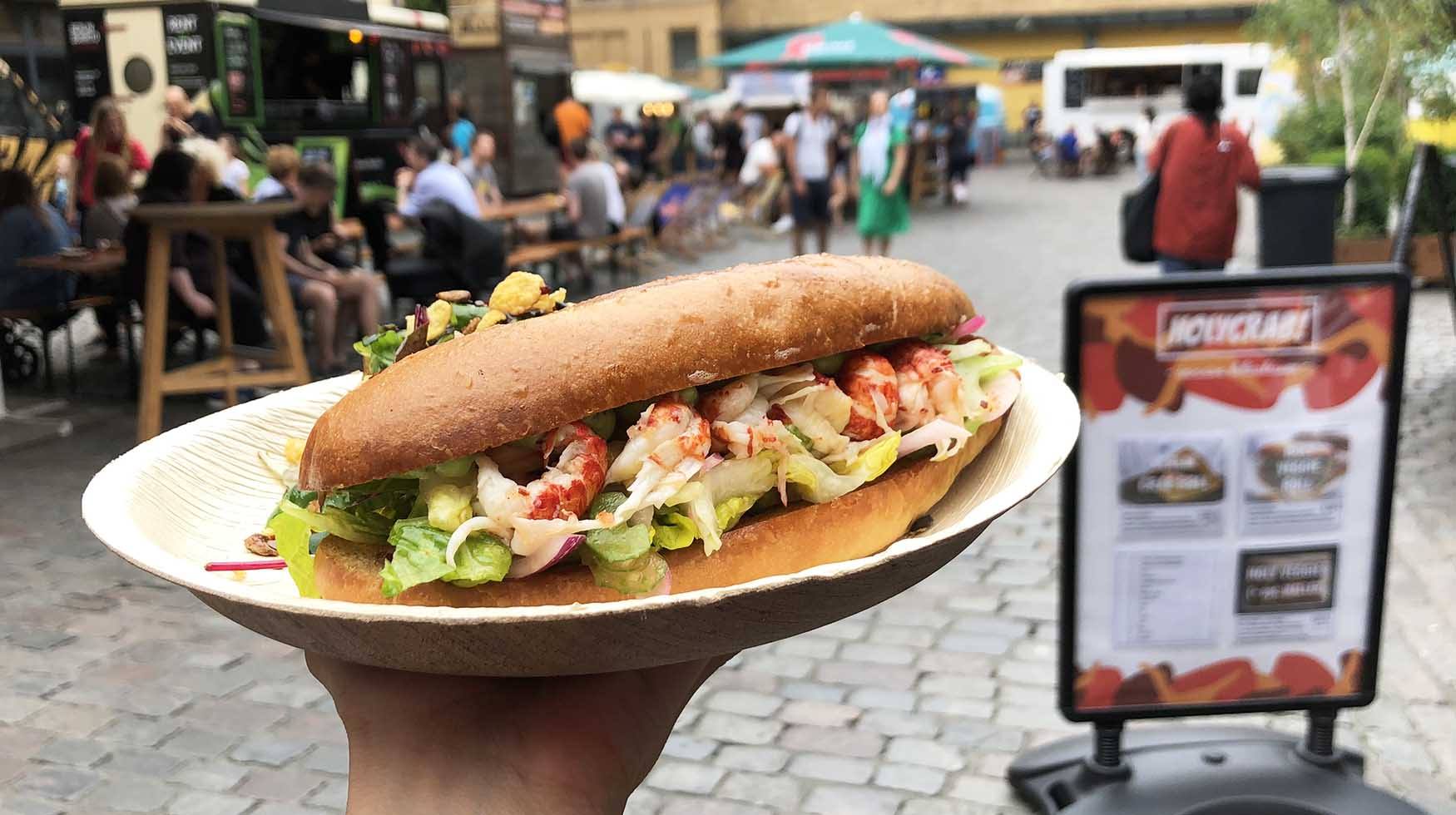 With Holycrab!, a Berlin food truck with a lot under its sleeve, Juliane, Lukas and Andreas introduced the concept of hedonistic sustainability. The main ingredients on their menu are invasive species of crayfish, fish and crab from around the city. Their idea is to remove the frustration that may come with the sacrifice of living a sustainable life. Everyone can help save the planet one delicious bite of invasive specie at a time! Juliana Bublitz talked to me a few weeks ago and told me all about their brilliant waste reducing concept and how the Louisiana crayfish got into the Berlin Tiergarten.

Hey Juliane, could you please tell me about yourself?

Hey Solynka! So, my professional background is innovation. I first did a Bachelor in Cultural Studies and then was lucky enough to get into the Hasso Plattner Institute where I studied design thinking. After that I worked as an innovation consultant for a little more than five years. And finally, a little more than a year ago I started to work on Holycrab!

How did you get into food?

Food is such a nice topic, basically any trend can be applied to food; it makes change so tangible. Lukas, my partner, and I always wanted to work together but we didn’t focus on anything specific. We started by producing little innovative notebooks and some other stuff. One day he came across this newspaper article about the Louisiana crayfish invading Berlin waters and we started thinking, ‘why isn’t anyone doing a food truck so everybody can eat them?’ It was a complete stroke of luck!

"Food is such a nice topic, basically any trend can be applied to food; it makes change so tangible."

How did you get from the idea to the execution?

We are busy people and we have new ideas all the time. We have so many web domains but most of the time nothing comes out of any of it. However, this time we applied at Kultur- und Kreativpiloten which is an award given by the German federal government to support creative businesses, and we got in! That was the first step in making it real. That’s also when we met Andrea, who was a friend of a friend. We then started to tell everyone around us about the project. When you start telling people, you have to actually do it. Kultur und Kreative Piloten targets the creative scene, so we applied to another one that focuses more on the gastronomy scene, the Gastro Gründer Preis, awarded by Tim Mälzer. This really helped us get the idea out into the world.

Did this prize help you get funding and to really execute the project?

Absolutely! On the one hand telling everybody about it got us very motivated but these awards really gave us the kick we needed because they give you deadlines to respect; forcing a discipline that you wouldn’t necessarily have for yourself. 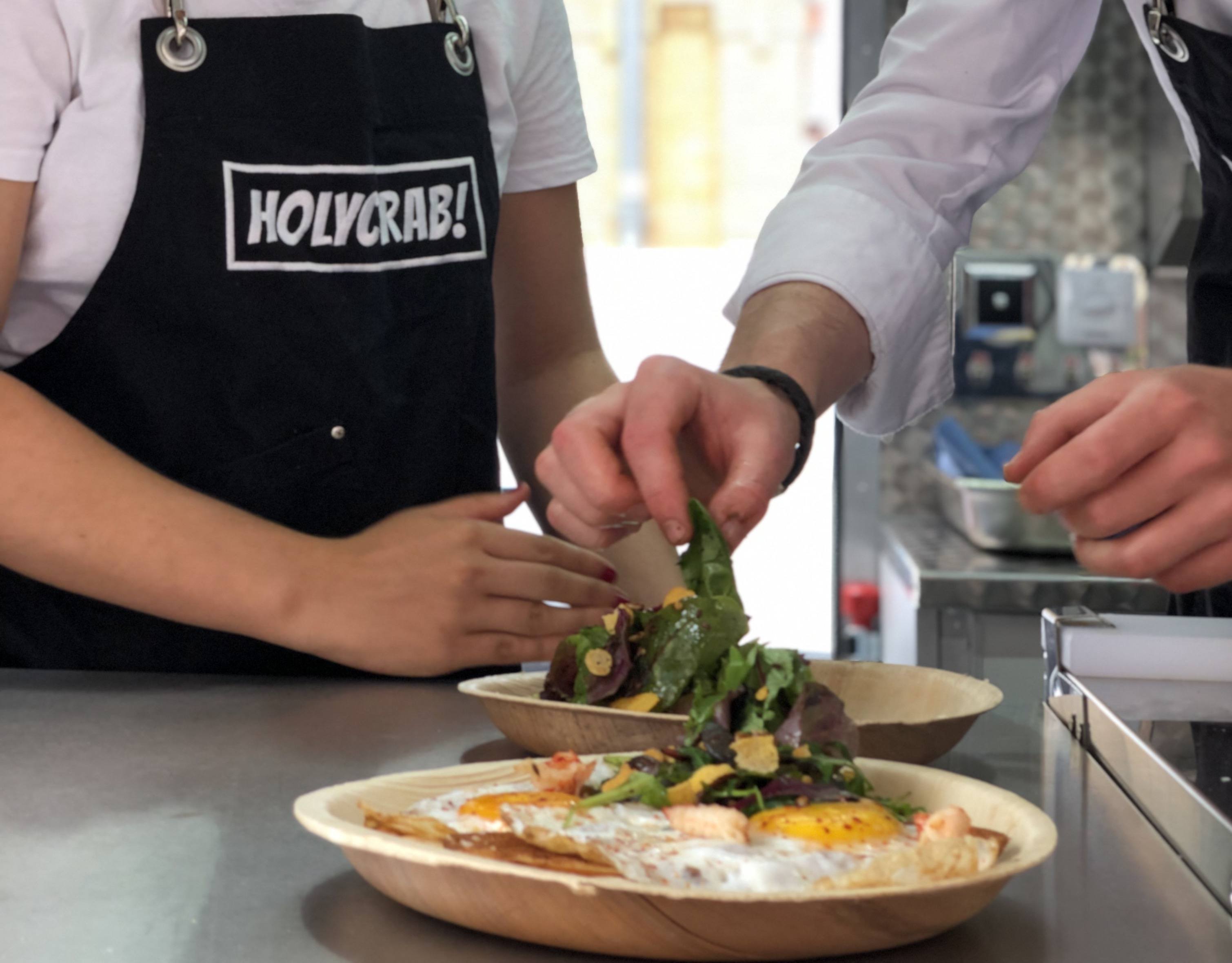 Could you please tell me more about your team?

We have Lukas, my partner in life and in business. He also studied cultural studies and design thinking and is now a business consultant. He takes care of the business side of things and I’m more in the future research area. Then we have our third, and most important member at the moment, our head chef, Andreas. He cooked in the best hotels and restaurants in Berlin; he really has the best background you could imagine to start a food business.

How does he feel about working with one main ingredient with such a culinary background?

Well, he gets very creative but he actually works with more than just one ingredient. We work with species like the Chinese Mitten crab, the Louisiana crayfish, the spiny-cheek crayfish and other different kinds of fish. In addition to that we are also working on incorporating a variety of plants.

Invasive plants? Who would’ve thought they were so many invasive species around Berlin!

There are and a lot more around the world! We were actually very surprised; once you start researching the topic of invasive species you discover a whole new world you didn’t realize existed. It’s a real problem! Some people are doing something about it but mostly in the field of nature protection. There are a few people in the US making it into food but not many people are aware of the problem in the first place. There are 17000 established invasive species in the world. You have invasive species that are integrating naturally and don’t do harm but then you have a whole lot that eat the food of the native species and destroy the surrounding nature. They don’t have any natural enemies so we need humans to be the natural enemy.

How did the species get there?

There’s a different story for each specie. The Louisiana crayfish probably got to Berlin because someone who had them at home or who raised them to sell them for restaurants released them into nature, in this case probably in Tiergarten (a big park in the center of the city) and they spread from there. It’s funny because the majority of the Louisiana crayfish is in the south of Germany and then there’s a tiny little spot in Berlin. Which confirms they come from two different sources. This is actually the most common story for these invasive species: someone decided they didn’t need the animal anymore and released it outside of its native environment. The Chinese mitten crab got here because of trade. Big cargo ships carry a lot of water at their bottom to balance the weight of the merchandise, when they remove it from the boat they also release the water they had taken from the other side of the world which includes a lot of animals too. And of course they are also natural processes, the animals hold on to a piece of wood and they go overseas and spread. But humans remain the greatest catalyzer.

"If we could find a way for every sustainable action to be hedonistic then it would be much easier for everyone to follow up and do something good."

Since when have they arrived around here?

Chinese mitten crabs arrived around 20 years ago and the Louisiana crawfish started to become a problem in Berlin in 2016. But they must have arrived years before that. When we first noticed them, they had already become a problem. In 2017 the Senate in Berlin started to think about it and gave fishing permits allowing for their capture. This is an unusual way to deal with the problem. Normally you would try to take out as many as possible and throw them away.

Yes, it is! Although the natural conservatives usually try to have them transformed into animal food or something. Of course there are regulations but as long as you have the right permit, you can fish them in most waters around Berlin. For Tiergarten however, where our Louisiana crab comes from, you need a special permit because it’s a natural reserve.

Who takes care of the fishing for you guys?

We have close contact with the fisherman that fishes them.

Are there still native crayfish in the region?

Very very few and the ones that are left are heavily protected. The Deutscher Edelkrebs remains in a protected area and basically doesn’t live in the wilderness anymore. If a fisherman would come across one he would be able to differentiate it from the Louisiana crayfish and release it.

Crayfish are known to eat a lot of crap, is the water really clean enough in Berlin to eat them?

(Laughs) Thankfully yes. Basically the ones coming from the Elbe, the Müritz, and the Havel where we get the spiny-cheek crayfish, are natural fishing waters but in Tiergarten you have to be a bit more careful. But it was checked for pollution and completely passed the test. They are actually cleaner and safer to eat than most of the fish we normally get on our plates.

How do you manage to operate the business from Frankfurt?

It’s such a great concept, how come no one thought about it before?

(Laughs) thank you! Many people actually have thought about it before but the execution is really not that easy. It requires a lot of pioneer work. There isn’t much research on the species and a lot of the fishermen or hunters weren’t catching those species. For example, the hunters around Frankfurt don’t even have a price for Nile Geese because no one orders them. The whole process and legislation has to be put in place. But it’s also really cool because we get to start it! With this project, we really saw an opportunity to reinvent sustainability. Usually, if someone decides they want to be sustainable they think they have to cut down on meat, cut down on fish, cut down on transportation; it’s basically sacrifice. 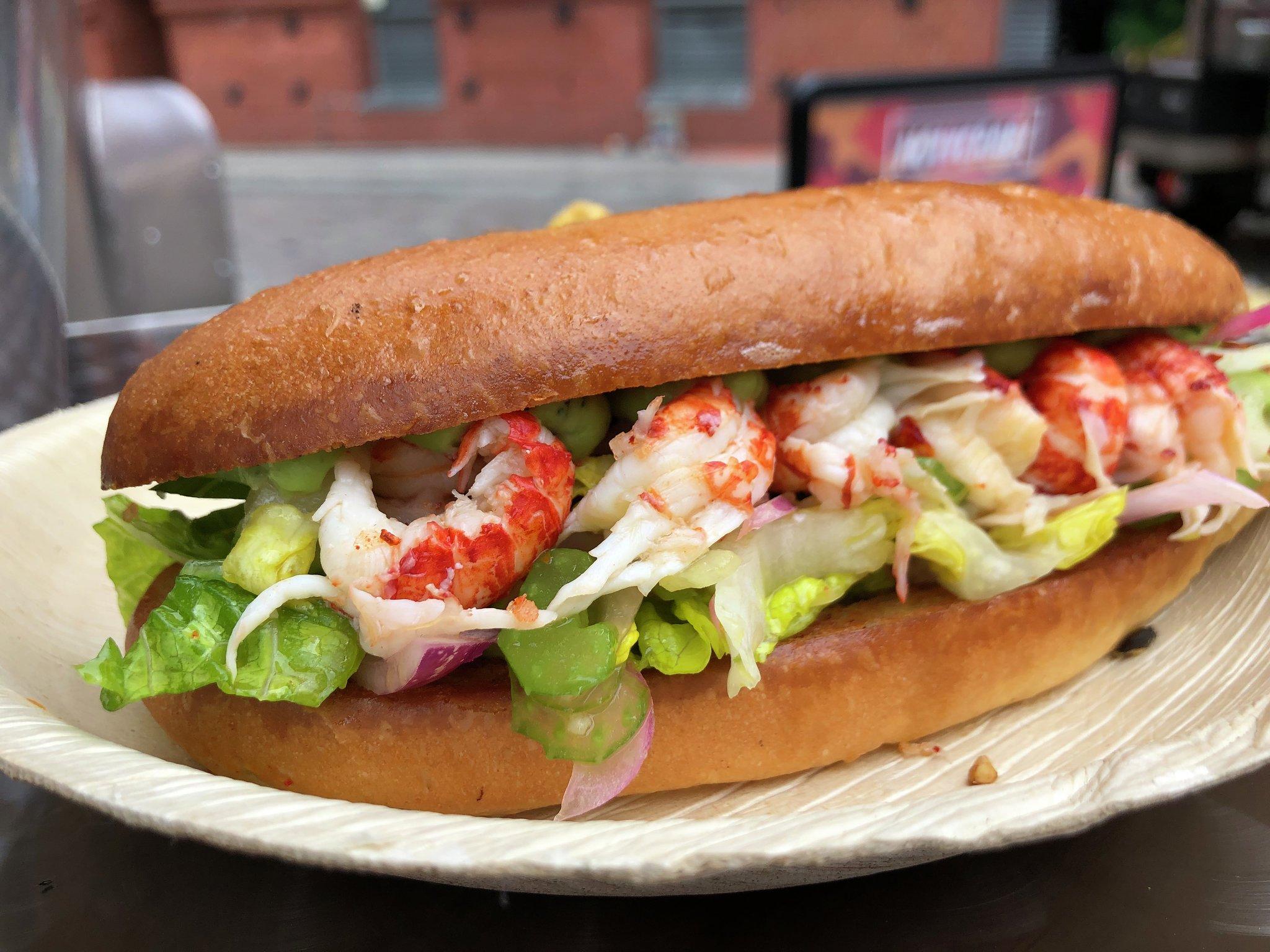 But if you think about consuming invasive species, you are not having any negative impact, you are actually having a positive one on the environment. And you are doing so by eating and doing something enjoyable. It’s a form of hedonistic sustainability. If we could find a way for every sustainable action to be hedonistic then it would be much easier for everyone to follow up and do something good.

What’s your favorite dish on the menu?

I love the Holy Veggies. It's made up of different kinds of veggies, cut like fries, deep fried, sprinkled with a salty granola and then covered with crab with vegan lemon aioli on the side. We source all the veggies from Querfeld which is a company that saves vegetables that don’t make it into supermarkets because they are too ugly.

Wow, you really have a whole round approach on sustainability!

Yes, we try. We are looking for sustainable reusable champagne glasses so if you know about one, tell me!

Where can we find you?

We just recently got into Markthalle IX, in Kreuzberg. You can also find us at the Kulturbrauerei in Prenzlauer Berg as well as different pop-ups.

Anything you want people to know that we haven’t mentioned yet?

We are not just limited to street food. We reinterpret street food in a gourmet way but since Andrea has such a high profile culinary background we offer any type of gourmet food through catering. We also want to experiment in the area of high-end cuisine area.

“It was food during the day and performance at night, I now have found a way to bring them together.” 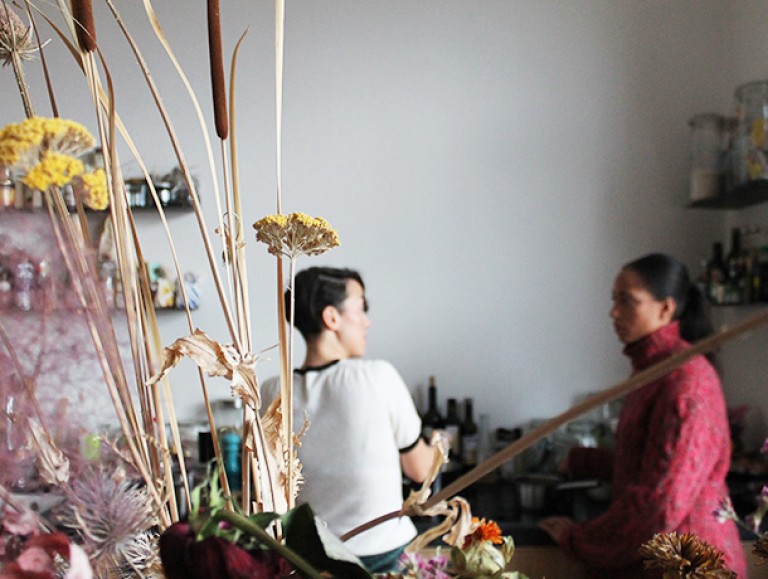 An Italian Chef in Berlin

Giulia Michetti: "My sustainability is based on a hedonistic choice."